I had a case reed bolt on kit prototyped. Clearance problems were the main factor in dropping the project. Others were cost and ease of machining for installation. And finally after flow testing showed my small reed design flowed as well as a 8 petal big reed (KX 500) I saw no need to go on with the projects. That's way more flow than necessary for the 34s that are the largest carbs that would fit with my stage 1 kit. The only downside of the small reeds is they are stressed more having to lift higher. So reed life is around 5000 to 6000 miles. Throttle response is excellent as with the big reeds and they work with very extreme porting. But to get the most out of the higher stages of porting you have to have larger carbs. So I have just finished the flow testing and just about have the masters ready for molding for my stage 2-750 kit. This kit will flow more than enough CFM for 40mm carbs, and as my other kits, they are bolt on with just intake port and piston modifications. Like my stage 2-500 kit, the carbs will be moved back about 25mm and will be angled to match the cylinder angle. The price will be close to the 500 stage 2 kit. 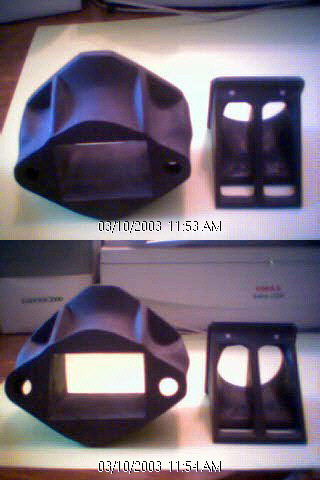 It's actually a dual reed set up (one for the windows on the bottom. There have been many reed block designs through the years. The "V" type was the one that became the norm, so others weren't pursued. The only updates were the Boyesen dual stage reeds, larger reed cages, and the V force brand reed block which is a "W" style.

The original reed conversions for the triples were made by GEM in the early 70's. It was a bolt on 4 petal equivalent to the RD 350. The problem was the reeds were pretty far away from the piston and didn't get a good suction signal and not a lot of flow. I myself started a project in 77 to graft on KX 80 reeds. (6 petal I think) The project died when I couldn't find a caster to do the castings. But I still wanted to do it sometime. I had ported the guts out of my '73-500 and it literally was a dog till 9500 rpm. But I liked the top end power, and I knew reeds would definitely help.

I didn't get the bug again until 1994 when I read a article in Fast Bikes on reed valves. (early test ones were made out of condoms...lol) And by this time Boyesen had come up with the dual stage reed. So I thought I would try again. After studying up on the subject I knew I needed to get the reed tip as close to the piston as possible. So I took a old 500 cylinder and opened up the intake as big as I could. Then I started on a reed block master that would fit in the port and still use the stock aluminum carb manifolds and the carbs in the stock location. I ended up with a single reed considerably smaller than the norm, but I had a lot of time into the project and wanted to know if it would work for myself. I knew I had some things going for me. First was that I would not have the "chamber" behind the reeds (which they make stuffers for now) and second is what I call the "screen door" effect. Air flow doesn't like obstacles and the "V" reed block has many, and the more reeds the more obstacles (V Force has done a lot to alleviate this problem). But on basic reed blocks the separators and the center of the "V" push the airflow up and down and left and right, kinda like running the water from a garden hose through a screen door, it does all sorts of things to the air flow. I was right my single 2 stage petal stage 1-750 kit flows as much as the very large 8 petal reed block.

The reed system I came up with has a flat bottom with the reed angled down (like a half "V") this keeps air flow at a high rate, and when the reed is open, there are no obstructions to the airflow path. This is where the Boyesen reeds came in. A small reed need to open wider than multiple reeds, so they have to be stiffer not to flutter at high rpm. But then they wouldn't open at lower rpm. With the Boyesen dual reeds, you have a bottom stiff reed with holes in it and a lighter reed on top of it closing those holes. So at low rpm the lighter reed opens and when the suction gets great enough the stiffer reed opens. Now I have theoretical throttle response and no high rpm flutter. I got the castings done, and Boyesen made me up some special reeds. So I start grinding on my 500 cylinders to the specs of my first 500, and yes, it was a slip the clutch to get going, slow can't get out of it's way dog till 9500 rpm but with a killer hit. After that test, off came the cylinders, holes drilled in the pistons and reed blocks installed. Totally new bike, no clutch slipping to get rolling, just go. Where it would bog, now it just pulled, and it was happy to rev to 11,000. SUCCESS!!!!!! There were a few things to work out, I had to add reed stops, redesign the block for a firmer lock into the manifolds and play some with reed thicknesses. I think I went through 5 or 6 variations and bunches of reeds. I then went on to the 750 and S series triples with the requisite redesigns and test reeds (I have bags of test reeds) and then to the Stage 2 so to fit larger carbs to the 500 and S series. And finally......LOL to the reed block in the pic, that is the stage 2 for the 750 as described. Setting back the reed block allowed for more reed area, to be easier on the reeds. and also it was long enough to add booster ports on the bottom side without creating an airflow obstruction.

So it really started out at "see if it would work" to a viable performance accessory. (to those that want performance). And the main criteria I had for producing the kits was to make them easy to install and be affordable. I think I have done that.